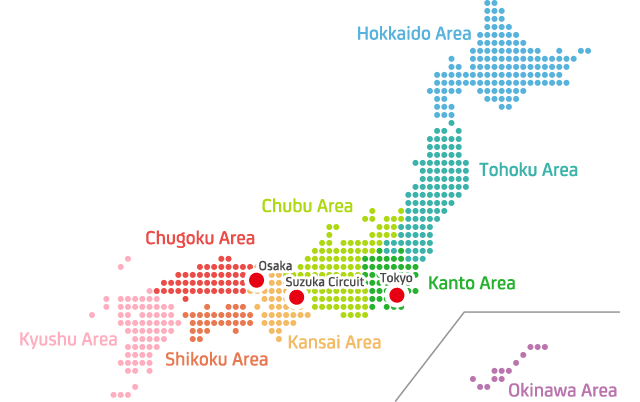 The Chubu Region consists of the Tokai Region, the Central Highlands, and the Hokuriku Region, and there are nine prefectures. Due to having steep Japan Alps in the central region and being located in between Tokyo and Osaka which are the economic and cultural centers of Eastern and Western Japan, the Chubu Region has differences in various aspects in the Eastern and the Western parts. Mie Prefecture, where Suzuka Circuit is, is located exactly in the central area of Japan, and access is excellent from both Kanto and Kansai.

Suzuka Circuit, which hosts the big events such as the F1 Japanese Grand Prix and the Suzuka 8 hours, is located geographically close to the center of Japan, and you can move relatively easily to various places in Japan.
Also there are a number of world famous tourist attractions in the surrounding area.
Especially in the area between Kansai International Airport and Suzuka Circuit, there are big cities such as Osaka, Kyoto, and Nagoya, and there are also various sightseeing spots around Suzuka Circuit such as Ise, where the Summit was held, and Iga, which is known as the village of Ninja.
When you visit Suzuka Circuit, please visit these beautiful tourist attractions.